Dwarf Mine is a slot game made by Yggdrasil. It’s not their best game, but it definitely has its strong points. There are many new online slots 2020 and Yggdrasil has made some of the best ones for sure, with many fun themes and features. However, now we will dig deeper into the Dwarf Mine slot. You can learn all about this game and then some by reading our article.

The theme of Dwarf Mine 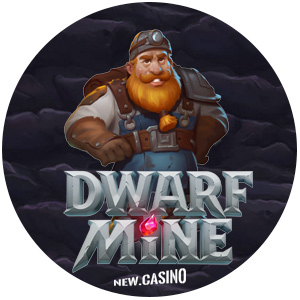 The theme of Dwarf Mine is a dwarf in a mine. Slot games don’t usually go against the grain when it comes to these things. You won’t find a dwarf strolling in the backyard. It’s always in a mine. Why should this be the case – one can only imagine. But the game begins by giving you an image of the dwarf himself. He goes with his pickaxe at the end of the road in the mine. He then throws his pickaxe and takes the crude digging device instead. He then goes on the road to the riches in the mine.

Perhaps the strongest part of the game is to be found in its music. It’s very dramatic and very good. On one hand, it does give the impression of a dark mine where a dwarf works tirelessly day and night to find riches. On the other hand, it gets a bit too dramatic at times. It may seem more appropriate for the landings on the beaches of Normandy than for a game about a dwarf in a mine. It’s very hardcore. We love it.

And there are many interesting parts in the game. You will see bones and sculls when digging in the ground, at times. Also, you will see leprechaun hats in the ground. The game is funny like that. So, we’re really pleased with how the theme is set up.

The features of Dwarf Mine

The main feature of the game is that there are no less than 16,807 ways to win here. This is due to the addition of another feature in the form of expanding reels. The reels start out on the 5×4 layout. But they can expand to a 7×4 layout if you get lucky. And this will activate all the potential 16,807 ways in which you can win. The way to expand the reels is to get bonus symbols. This will do the expansion for you and you can benefit from multiple ways to win.

You can also gather various crystals when you play. You will even be rewarded with them as a new player. Get 5 of the same crystals and you will get 5 free spins with special features. During these five free spins, the reels expand to 7×4 and there are big multipliers.

Dwarf Mine by Yggdrasil is a very dramatic game. And we love the theme – we really do. However, it really falls a bit short to becoming one of the true greats in terms of slots. Yggdrasil is a studio with huge potential and it has made some of the best games for new casinos. However, in this particular case, they could have made additions of new features. For example, there are no wilds or bonus games. But still, we have to say that we have had a lot of fun playing this game. We hope that you will have fun, too.